When Leo Klink stood up to speak at his mother's funeral, just about all of the 700 in attendance knew about the tragedy that took place at the 17 year-old's last high school soccer game. Leo's mom's dying request made news all over Hawaii, and so did the soccer star's inspired performance that day. 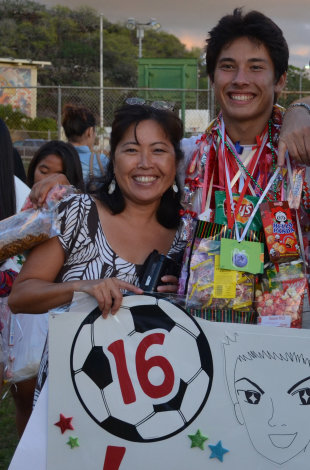 Leo Klink and his mother, Hiroyo. (Courtesy of Klink family)
The mourners all wanted to know Leo a little better, and know his late mom a little better, too. Leo could have said anything at that funeral, or nothing at all, and been embraced for it. Yet his choice of words was telling and powerful.
Leo decided to tell a story about a little moth.
Leo Klink wasn't destined to be a great high school soccer player, or even a member of a great high school team. "I didn't think we were that good my freshman year," Klink said. His mom, Hiroyo, started him in the sport when he was seven, and she didn't have the World Cup in mind. She wanted most of all for her only child to go to college, and Leo worked hard in the classroom to make that happen.
"She taught me you can't just sit on your butt," Leo said. "You gotta get out there and work hard. Hard work gets you places."
Leo could see that clearly. His father, Paul, couldn't work at a 9-to-5 job because of a heart condition, so it was Hiroyo who spent long hours in Waikiki as an accountant. She still had time to teach her son, though, coaching him on the game, putting together highlights for the team, telling her son to respect his teammates, and insisting that he smile. Always smile.
"She had a great smile," said Michael Ching, Leo's high school coach. "She didn't speak a lot of English. But when I would see her, she would have that great smile."
Leo became known for that smile – his mom's smile.
Then he became known as a terrific soccer player. Klink won Gatorade's high school soccer player of the year for Hawaii in 2012 and took his team to the state finals where they lost 3-0. The honor went to him as a junior not only for his play, but also his academic performance and "exemplary character." He volunteered to help the March of Dimes and those affected by the Japan earthquake and tsunami in 2011. Hiroyo and Paul had raised a good kid.
This season, as a senior, Leo led Kalani back to the championship game with 24 goals. Standing in the way was Punahou, the well-known prep school attended by Barack Obama, Manti Te'o and Michelle Wie. Mom and Dad were, as always, in the stands.
Punahou scored first, 15 minutes in, and then Leo tied it on what Ching called "a perfect ball."
Early in the second half, the game was stopped because someone fell ill in the stands. The players on the field had no idea who it was, but word soon reached the head coach: It was Leo's mom.
"I didn't really know what to do," Ching said. "I kinda thought it would crush him. Our team is close and the relationship with the mom was close. It would devastate him, and we didn't know the condition."
Ching continued to wonder and worry until he was given a message: "Don't tell Leo. Do not tell Leo."
Hiroyo had suffered a stroke. Her husband, Paul, had the presence of mind to ask her to smile as she dealt with dizziness and weakness to her left side. When someone has stroke-like symptoms, asking him or her to smile gives a good read on what's wrong. Hiroyo couldn't smile, and that's when Paul knew it was bad. Paramedics were called and Hiroyo was sent to the hospital, but not before she insisted that her son not be told she was in trouble.
The game went on as Leo's mom fought for her life. Punahou took the lead again in the 50th minute, and then it was Leo again, taking the ball to the 18-yard mark and blasting in the tying goal. The game went to overtime.

The teams played two scoreless extra sessions, forcing the game to penalty kicks. Shootouts were not Leo's specialty, and Ching worried about what would happen if his star lost the game for the team and then found out his mom was in the hospital. Yet the coach had a feeling about Leo. He slotted him fourth out of five.
Three rounds passed and nobody scored. It was Leo's turn. He punched his shot into the right side of the net. For the first time, Kalani had the lead.
Punahou had one more shot. Kalani's goalie made the save. And that was it. Leo had led his school to its first-ever state soccer title, scoring all three goals. Emotions poured over the team. Many of the boys were crying. And then Leo's club coach, who was there to cheer on the team, heard from the hospital: things were looking bad. There might not be much time. The coach came over to Leo and told him: the ambulance was for your mom.
Leo fell to his knees, dropped his plaque onto the ground, and cried.
"It was one of the worst things in my life," Leo said. "So heartbreaking. Knowing your mom had a stroke and you couldn't do anything about it."
Leo rode to the hospital and squeezed his mom's hand, and telling her over and over again how he loved her. She was already unconscious.
Two days later, Hiroyo passed away. She elected to donate her organs, so five people will live because she lived. One of the last things she heard was her husband telling her Leo's team had won. Her wish to let him play was fulfilled.
She smiled.
"That's what she wanted," Leo says now. "She wanted us to have a state championship title. Giving her that final news, I think that was the best news of her life." 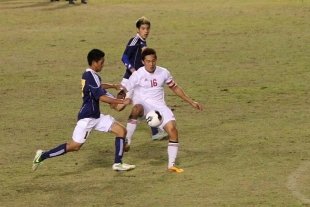 Leo Klink, 16, led Kalani to the state championship with 24 goals this season. (Courtesy of Klink family)It's been two weeks now since Leo lost his mom. He misses everything about her: the advice she gave, the times they spent talking about the game, the way her special salmon dish made the house smell. And of course, her smile.
"I miss her love," he says. "I miss her existence. I miss her food."
A Facebook page has been set up to raise money for Hiroyo's biggest dream for Leo: a college education. Things will be tougher now, since Paul can't work the way Hiroyo did, so there is concern.
"No one can replace my mom," Leo says. "My dad is doing one half; I'm doing the other half."
Leo isn't sure where he wants to go to school next year, but he wants to play soccer. "It's gonna be great when I start again," he says. "She'll be watching over me."
A few days after his mom's passing, Leo went out with some friends who wanted to cheer him up. They went bowling. The group finished around midnight and got into the car. One of Leo's friends noticed a black moth flitting around. He told Leo about an old legend known to many in Hawaii. When a loved one passes, a black moth is sent to watch over those left behind. Leo listened to this and looked at the moth in awe and wonder. It was floating in the car, just over his head.
Leo told the story of the black moth at his mom's funeral. It said everything about her, how she loved him and looked out for him even when she could no longer watch him – especially when she could no longer watch him.
"It flew right above me," Leo says, "and stayed there."

Email ThisBlogThis!Share to TwitterShare to FacebookShare to Pinterest
Labels: article